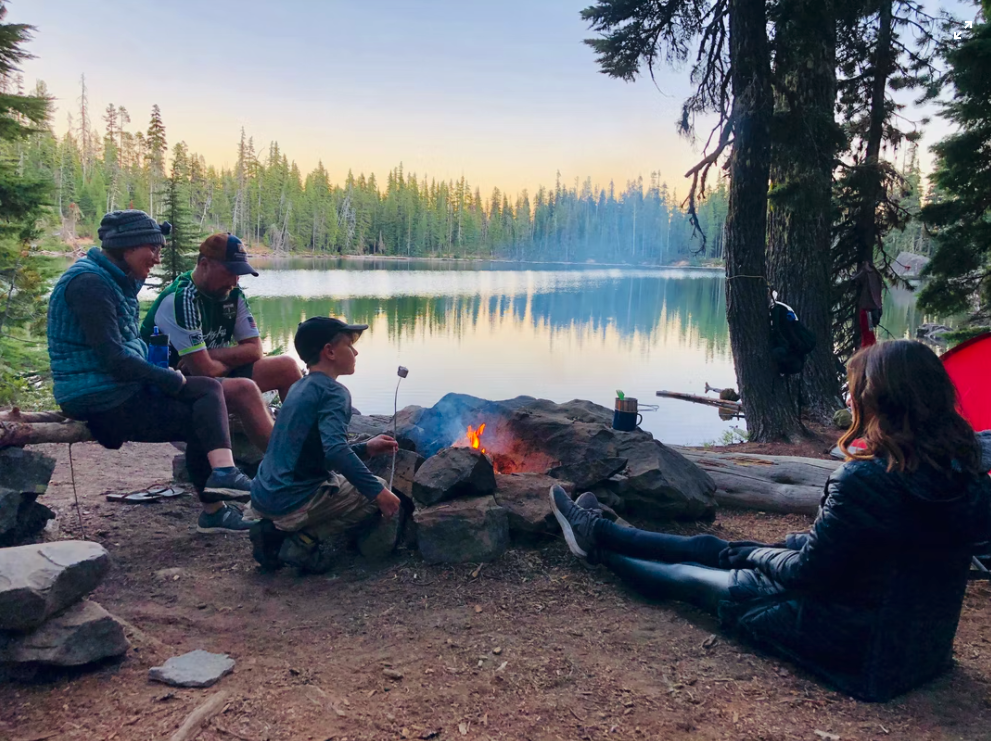 Unfortunately, far too often, one does not exist without the other.  Youtube has made some people way too famous for the wrong reasons.

Being able to harmoniously live, camp, and enjoy our natural landscapes while we still have them is a beautiful thing.  Doing so with respect, knowledge, and understanding makes it even more beautiful.

Enjoying our Earth’s wildlife while living, eating, sleeping, and existing right in their own backyard is not as difficult as too many people make it.  Follow a few simple rules and exercise some common sense and it works out for everyone.

Today, we look at some simple guidelines on how to avoid dangerous animals while camping.

Understand & Familiarize Yourself With The Local Wildlife

Wild animals in the southeastern United States are much different than the wild animals in Montana.  Are you going to be in an area with lots of venomous snakes, spiders, or scorpions?

Finding out what animals are potentially dangerous to you, your family or your pets is as simple as Googling it, or calling a local Forest Ranger Station.

Understand this before you read any further though.  All wild animals have the potential to be dangerous.

All Animals Are Dangerous

When most people think of dangerous wild animals, the ones that typically come to mind are bears, mountain lions, alligators, wolves, or venomous snakes.

While it is true, these are all very dangerous animals under the right circumstances.  However, there are some animals in the wild you are likely to encounter that can be fatal if you provoke them.

You may be surprised when we mention this, but moose, deer, and mountain goats have been known to attack and kill people.

Moose are especially dangerous because they have no instinctual fear of humans, and their size alone is enough to kill a person by being trampled.

Avoid dangerous animals while camping even if you do not perceive the animal as dangerous.

Just six years ago an Olympic mountain goat gored and killed a hiker.  While they are beautiful animals and seem harmless, their horns are particularly sharp and potentially fatal.

Elk, especially during rutting season can be particularly dangerous as well due to their large size alone.

It’s understandable to want to get that perfect photo as close to a wild animal as possible.

You must always remember that animals are wild and they too can get annoyed at humans. Just avoid dangerous animals while camping, and everyone stays safe and happy!

Do Not Feed The Animals

This really should go without saying.  Growing up in Florida, we were always told not to feed alligators.  In Florida, at any given moment there is an alligator on average within 100 feet of every person.

Feeding a gator is tempting and we understand the appeal of it.  Same with a bear, mountain lion, wolf, or any other wild animal.  Sometimes, even feeding deer or birds can be a dangerous encounter.

Of course, besides the dangers to ourselves, feeding wildlife anything but their natural foods is detrimental to the animal's health. Avoid dangerous animals while camping by not feeding the wildlife.

Do Not Tempt or Stress The Animals

Honking your car horn or whistling, calling out to a wild animal such as a bear, moose, elk, or any wild animal only makes you look like an idiot, but worse, it stresses the animal.

Not stressing out the wildlife is the best way to avoid dangerous animals while camping.

The Road Belongs To Them Too

More deaths in the United States are attributed to deer than any other wild mammal in nature.  When driving your vehicle or bicycle, always give the wild animal the right of way.

When driving speeds in excess of 20 mph, be on high alert for deer, elk, or moose crossing the road.  While a deer can do substantial damage to your vehicle, a full-grown bull elk or moose can total your skoolie.  Driving defensively is another good way to avoid dangerous animals while camping.

Animals Always Have The Right Of Way

Sometimes you may be in an area where deer, elk, bison, or some other animal is herding and on the road.  When this occurs, it is in your best interest to shut your car off and patiently wait for the wildlife to clear the road.

Never try to coax or bully an animal in the road out of your way.  Not only is this dangerous to you and your property, in most states, but it is also against the law.  The charges would be harassing or molesting wildlife.  Avoid dangerous animals while camping and driving through their territory.

Whenever you are in bear country, regardless if it is black, grizzly, or polar bear, always carry bear spray with you.

In addition to bear spray, it is a great idea to put a bell or two on your person and your pets as well.

If you are unfortunate enough to sneak up on a bear, it usually goes sideways fast.  Bears do not like to be startled and will often charge you.

Understand this, you will never outrun or outfight any kind of bear.  They are much faster than you and are much more lethal with their strength, size, and weapons.

Sometimes you can not avoid dangerous animals while camping, so it is smart to be prepared if you do happen to encounter one.

If you happen upon a black bear, most of the time it will flee you.  In the event it does not, stand your ground and make loud noises.  Use your bear spray as a last resort.

Slowly, without turning your back to the bear, back away while continuing to make loud noises towards the bear.  If the bear does charge, spray its face and hope for the best. If you cannot avoid dangerous animals while camping, be prepared to protect yourself.

Grizzly bears are much more confident and aggressive than black bears.  If you are approached or charged by a grizzly, again, point and fire your bear spray at their face, but wait long enough so that your bear spray will reach them.

If you do not have bear spray or it did not work, fall to the ground and make a ball.  Cover your head and neck with your arms and hands and face down.

Most of the time a grizzly will not continue to attack if you are effectively playing dead.

A polar bear is a whole other breed of bear.  If you are unfortunate enough to encounter a wild polar bear, our best advice for you is to pray to whatever god you want to spend eternity with.

Watch Where You Are Walking

While walking through a field, a forest, the desert, or around water, be sure to watch where you are walking. There are 20 species of venomous snakes in North America.  Seventeen of those species belong to the rattlesnake family.

The three remaining venomous snakes in North America are the coral snake, cottonmouth, and copper head.  Avoid dangerous animals while camping such as venomous snakes b knowing the habitat you are camping in.

Every lower 48 states in the United States has at least one venomous snake.  Alaska and Maine are the only U.S. states in North America with no venomous reptiles.

Do Not Pee or Poop Within 200 Feet of Your Campsite

A sure way to avoid dangerous animals while camping is to use the bathroom well away from your campsite.

Peeing or pooping near or around your campsite is an invitation to all sorts of animals.  Animals are creatures of habit as well as territory.  Wild animals have their territories routinely patrolled.

This is just one of the smart camping rules to always live by while camping in the bush. If you would like to read more Smart Skoolie Camping Rules, click the link and enjoy the read.

When a new smell from another mammal is introduced to their territory, you can bet they are going to investigate who and where the smells come from.

It’s not that big of a deal if the animal is a squirrel, raccoon, possum, or even a bobcat.  If that animal is a bear, mountain lion, coyote, wolf, or a very large moose or aggressive goat, then you may have a problem.

It is recommended that you do not pee or poop within 200 feet of your skoolie campsite.  That is approximately 70 adult steps with a normal gait.

Wrap-Up To How To Avoid Dangerous Animals While Camping

What is the best way to avoid dangerous animals while camping?  Simply avoid them.  If you want an amazing picture of any kind of wildlife, invest in a very good zoom lens.  That is the safest way to get wildlife photography.

If you want to admire and observe wildlife in their natural habitat and behavior, invest in a good pair of binoculars or telescopes and watch them all day long.

The best way to avoid dangerous animals while camping is to keep your distance!

If you want to get up close and personal and have a one-on-one encounter with a wild animal, may we suggest you have your last will and testament up to date or very good health insurance at the least?

The wilderness belongs to nature.  Wild animals are nature.  Do everyone a favor and avoid dangerous animals while camping at all costs.

It is best for them, us, and other people who encounter these amazing creatures after you to leave them be.

What are some of your strategies and tips to avoid dangerous animals while camping? 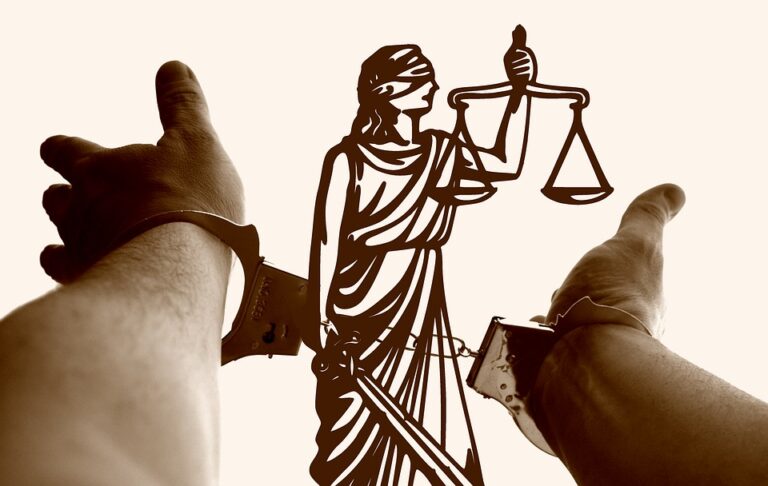 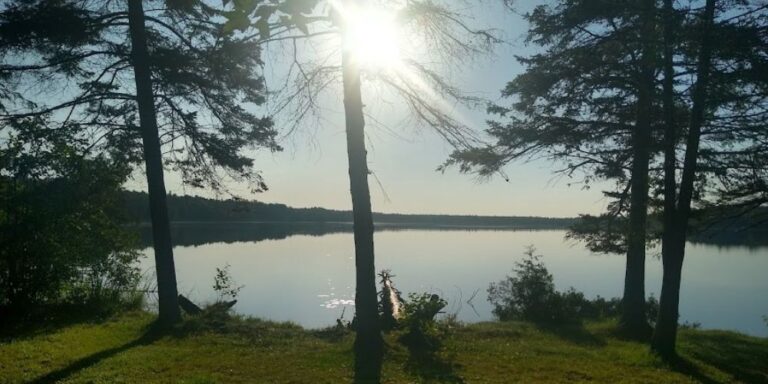 Setting up your skoolie campsite is one of the most important aspects of skoolie life.  Especially when you are parking and camping in national or state parks, BLM land, or dispersed camping. Having a set routine or checklist for setting up and breaking down your skoolie campsite will make life so much easier for you!… 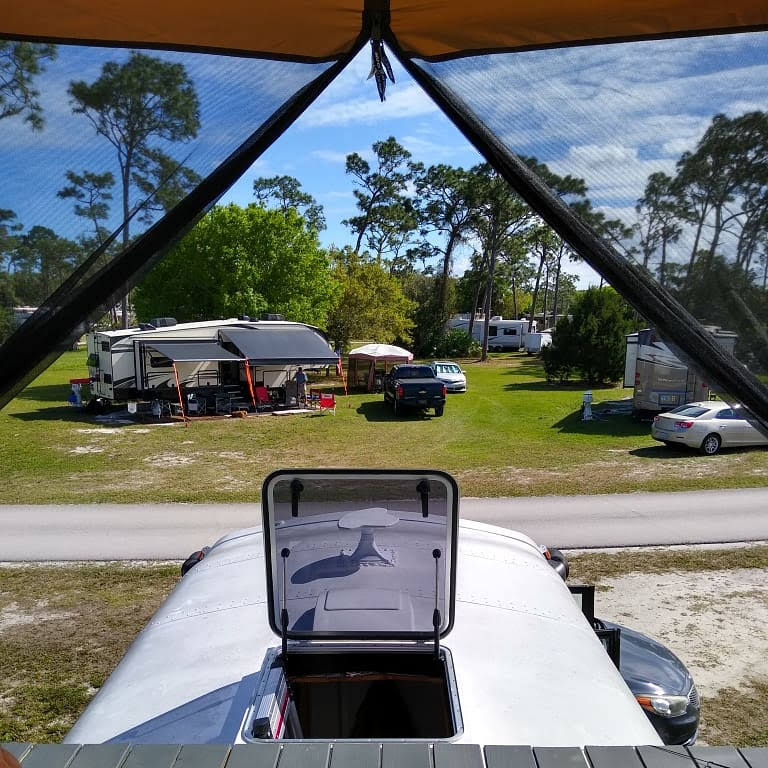 Skoolie camping rules. We have witnessed it too many times, individuals and couples finding a spot to spend a few nights in the wilderness, and having no idea of what to do. Some people have no idea what skoolie camping rules are all about. Don’t get us wrong, we don’t have all of the answers… 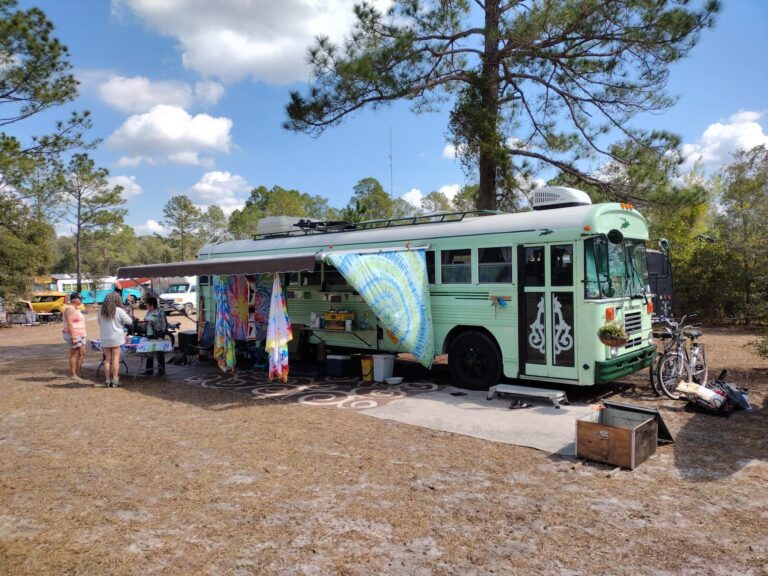 Awnings and skoolies go together like sunglasses and the beach.  Awnings, however, do not get the attention and consideration enough when it comes to skoolies.   Awnings, to most people, are those sheets of fabric that only couple up with an RV.  That could not be further from the truth.   Of the few people we have…